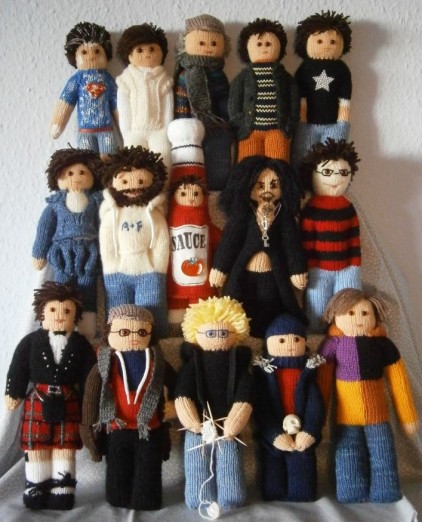 It all started quite harmless…

I had invented SuperSecretary, a little chubby superhero secretary of whom I made a Günni-style knitted doll.

A while ago I found a site on the internet where they had Doctor Who Fan Art. There were crocheted dolls similar to my Günnis, just a little more sophisticated. Well, if they can do it, I can too. But I wanted something different, something they didn’t have. Little DT dolls, Günni-style, that’s more like it. I went through my leftover yarns and found some suitable ones. That’s how my DaveyDolls were born.

The reference pictures I used are here shown side by side with the ones of the dolls. I have to admit that a certain likeness to real existing people is totally intentional. 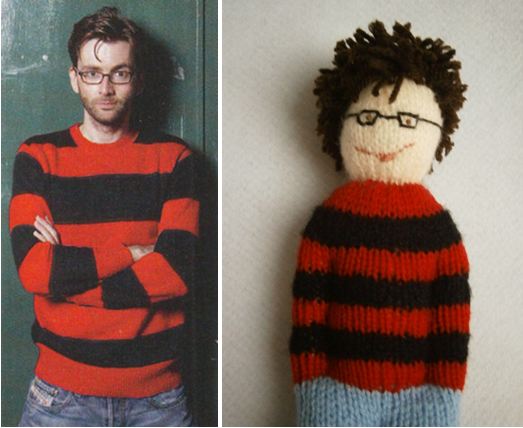 A while ago a second picture from the 2009 Radio Times photoshoot surfaced. It took me the whole of a Saturday afternoon and evening to knit this little guy. Though it’s not exactly a work of art, I posted a picture on one of my blogs. In the meantime I discovered they sell tiny glass eyes for teddies. So I ripped out the stitched eyes and put the glass ones in. And stitched new glasses.

What about a little Davey wearing one of his famous hoodies? I’ve got the right colour yarns. This even works with my Günni pattern. I have no idea how to knit a hood. A little pouch, laces, A&F hat to be on it. Oh – and a beard. He can be easily recognized, methinks.

I want a little kilt wearer now. My Günni pattern is not helping – a kilt has got no pockets. So I had to knit an extra pair of arms. And a kilt. And a jacket. And the little sporran. And I had to ‘decorate’ him – buttons, bowtie, the little knife in the sock, buckle, shoe laces, the kilt’s tartan. This took me a while. But finally he was finished. 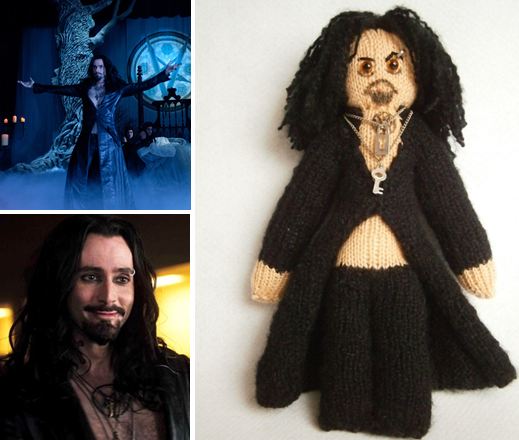 Now I must have a Peter Vincent, the Las Vegas magician and vampire hunter (from the Fright Night movie). Our little friend needs separately knitted arms. First thing is to knit the lean body. The coat has to be pretty wide at the bottom. No idea how to knit it. Fitted perfectly at the first dress rehearsal. Beginner’s luck. Give him hairs and a haircut. Had to make the jewelry myself. Now a visit to the make-up department… and he’s done (painted this time, because it’s hard to stitch on knitted material). This time there was even a request from Spain if I was willing to sell them all. Sorry, no.

Professor McDonald, University of Gallifrey, Department of English Literature and Time Travel. Lives in London under an alias and has got a job as an actor. Is just returning from the post office where he picked up his new scripts. (At least that’s what it says in one of my fics.) Shall I knit layers? Well, the red hoodie is a must-do. I’ll leave off the checkered sports coat, or else he will look like the Michelin man afterwards. The famous brown coat with the big pockets (bigger on the inside?) can’t be left off. How do I knit the cap? Someone jokingly asked if he actually was … Of course he is!

His part in Taking Over The Asylum. Nice multicoloured sweater, suits my leftover yarns. The front and back had to be knitted separately. I’ve tried to join the arms directly to the body (hands in his pockets). No use. So it was extra arms again… Baggy jeans, popper haircut – done! 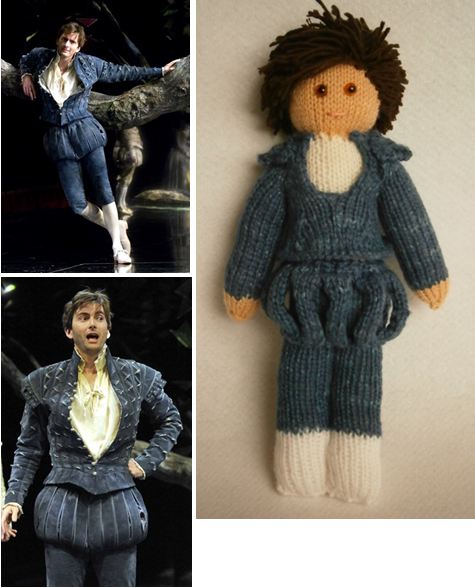 DT as Berowne in Love’s Labour’s Lost. Heroes in tights. Because of the amount of work of knitting all the strips for the trousers he wasn’t on my list in the first place. Well. It can’t get any worse, can it? Isn’t he sweet? 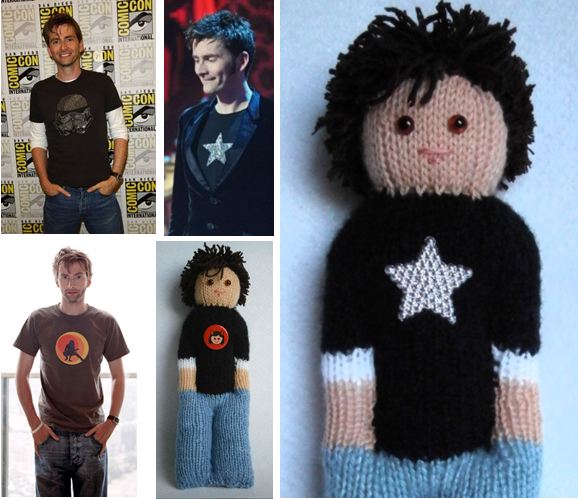 Maybe one in a T-shirt? His trademark look: black T-shirt with various prints, white long-sleeved shirt underneath. A star motif? Didn’t find one. Maybe a sticker button might work. Not exactly a Bond girl. I found a star later when the Christmas decorations appeared in the shops.

Now I’m gonna make myself a Hamlet. I’ve got an idea – the churchyard scene. Anorak with hoodie, sweater, knitted cap. And of course I need a rubber skeleton for decapitation. They didn’t sell any. So I tried Fimo clay. My attempts all looked like skulls, but in the end I went for a skull-shaped eraser after taking off some crossed bones. A little small, but well. 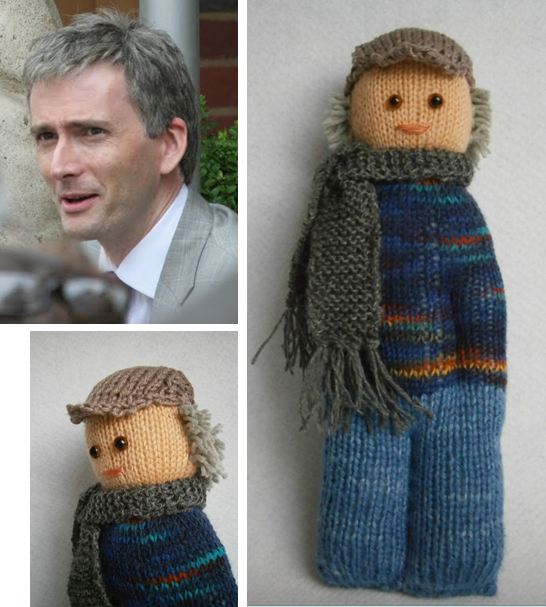 So – we had past and present Daveys. How will he look like in about 20 years time? Naturally, there’s not yet an example picture – but wait, there is … St. Trinian’s II. Surely his hair will have turned grey. Still wearing his baggy jeans and, say, a colourful sweater. A scarf. And a cap. For his achievements in film and theater in general and for the BBC in particular he will be knighted – at least by me. Ladies and Gentlemen – Sir David Tennant! 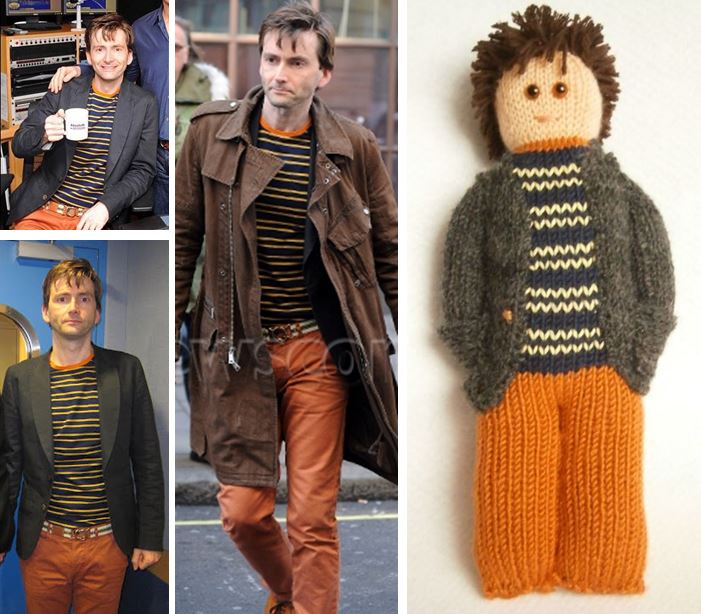 Well, he never fails to chose his wardrobe differently. To the pleasure of his radio presenter friend: “You’re looking like the french pen pal!” The jacket too short and tight again, worn open and with different buttons. 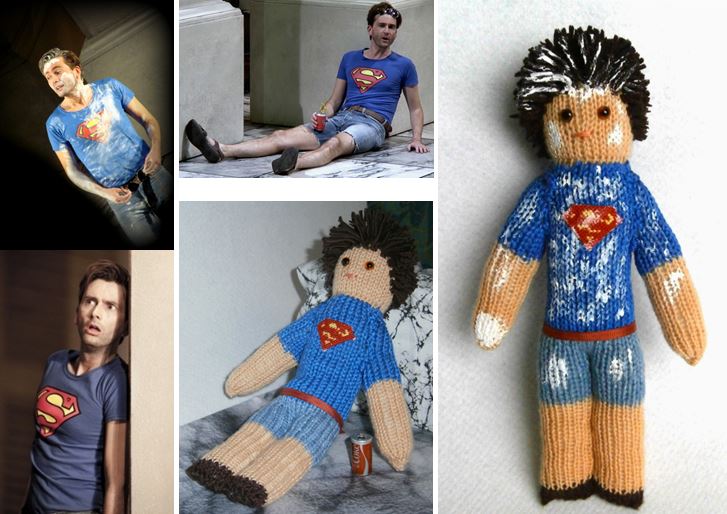 OK, Superman tee, later smeared with paint. From Much Ado About Nothing. At first I was quite hesitant to use the paint, can’t reverse it.

Incredible. Is there anything this man doesn’t do? This is from the trailer for Sports Relief 2012. Did someone have a stork among his ancestors? Someone from a fan forum asked me if I could knit that one. Sure I could. Only did I have trouble finding the tomato brooch again which then luckily surfaced. Et voilà!